The DVD-Video standard defines options that allow multiple titles to share portions of the same video, audio, and subpicture streams. These features, commonly referred to as Multiple Angles and Seamless Branching, require that special video encoding and DVD authoring be used to create Interleaved Video Units. This is often referred to by its abbreviation of ILVU.

While a standard MPEG file already consists of interleaved streams, in ILVU the streams are divided into portions that are shared between titles and those that are unique to one title. These are then divided into smaller segments that are interleaved with each other. If you look at the diagram below you can see that additional video, or video audio, and subpicture segments are inserted between the original interleaved segments. This ensures seamless playback as long as the laser doesn't have to move too far across the disc to reach the next segment in a particular Angle or Branch. The size of each segment can also be reduced to keep the distances smaller. 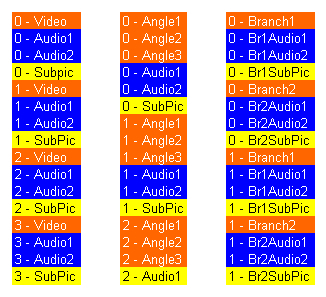