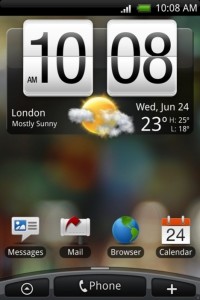 Most new HTC Android phones and tablet will come with HTC Sense installed as a user interface layer on top of the stock Android operating system.

The latest Sense is version 3.5 which is being rolled out now (as of September 2011).