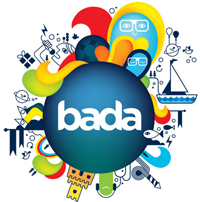 The first Bada-based phone was the Wave S8500 and at the same time Gameloft, Twitter, EA and others expressed support for the new OS, giving at least some developer support.

Samsung Apps, the apps platform for Bada has 3000 apps, 70 percent being free.

The latest Bada device is the Samsung Wave 3 which features a 1.4GHz processor, a 4" AMOLED screen, Bada 2.0 and a 5MP camera.