An image's Aspect Ratio, or AR, represents a comparison of its width to height. Notation for Aspect Ratio is normally in the form of X:Y, where X represents screen width and Y represents height. For example, a standard analog TV has an AR of 4:3 which means that for every 4 units of width it's 3 units high. This could be 4mm wide and 3mm high, 16in wide and 12in high, or 24m wide and 18m high. The exact dimensions aren't important, so long as the ratio between them is correct. 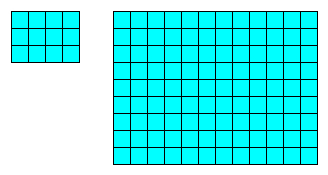 2 examples of a 4:3 image. Although the resolution is different, the ratio of width to height is the same

Storage Aspect Ratio
For digital files there are really two types of AR. The first, and easiest to understand, is the Storage Aspect Ratio, which is simply ratio of horizontal Resolution to vertical resolution. For example, a standard NTSC DVD has a Storage AR of 1.5:1 (720 / 480 = 1.5), while a typical PAL DVD has a Storage AR of 1.25 (720 / 576 = 1.25). Storage AR doesn't necessarily tell you how the picture will appear when shown on a TV or other display, although when viewing video on a computer you should be aware that some programs will use it to determine the shape of the Frame. Although Signal Aspect Ratio may be referred to as SAR, this is generally a bad idea since it can also stand for Signal Aspect Ratio, which means something very different (see DAR below)

Display Aspect Ratio
For digital files, the most important AR is the Display Aspect Ratio. This is the actual shape a frame is supposed to be displayed with, rather than simply the resolution. For example, the NTSC and PAL DVD-Video resolutions examples above will always have a DAR of either 1.33 or 1.78, depending on whether they're encoded for a Fullscreen (4:3 / 1.33) or Widescreen (16:9 / 1.78) television. This is why an Anamorphic (1.78 AR) DVD always looks squeezed horizontally when viewed on a computer without DAR correction and a Fullscreen (1.33 AR) NTSC DVD looks horizontally stretched, while a Fullscreen PAL DVD looks squeezed. DAR may also be referred to as Signal Aspect Ratio because the file signals the decoder to use a particular AR, regardless of resolution. Signal Aspect Ratio may be referred to as SAR, but to avoid confusion with Storage Aspect Ratio this isn't generally advised. To be as clear as possible it's generally best to stick to using DAR instead.

Pixel Aspect Ratio
Along with DAR, digital video files have a Pixel Aspect Ratio, or PAR. The PAR of a frame is the shape of an individual pixel. For playback purposes it's only important to know the video's DAR, but if only the PAR is stored in the video it can be used to determine the correct Display Aspect Ratio. Likewise, if no PAR information is stored it can be calculated from the video's DAR. PAR is generally used to assist image editing software in making accurate measurements and shapes. For example, if you're trying to make menu button highlights for a DVD and want perfect circles, the software used to create these images will need to consider the PAR so it knows to make it span either more vertical or horizontal Pixels, depending on whether it's Widescreen or Fullscreen, as well as NTSC or PAL.