Videotape is any magnetic tape recording system that records video. While most people think of videotape in terms of the analog (VHS, BetaMax, Video8, etc,...) formats popular through the late 1990s. However, videotape can also be used to store digital video, including consumer formats like DV and D-VHS. 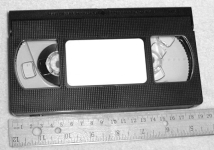 Videotape is also used extensively for professional digital video applications from news gathering to archival storage, although to some extent it's been replaced by hard drive and optical disc (DVD) storage. This is even more true in the consumer market where miniDV camcorders have largely been replaced by models which write to a hard drive or directly to a miniDVD.

VHS and Betamax
Until the DVD player took over as the standard home video format, the VHS (Video Home System) analog videotape format was common to find in most homes. VHS succeeded Sony's Betamax as the standard for home video. Although Betamax, which was based on Sony's professional videotape technology, was first on the market and considered by many to be superior, a number of factors led to VHS dominating the market, and Sony's decision to discontinue Betamax in the early 1980s. The underlying technology behind Betamax continued in Sony's Video8 and Hi8 compact Camcorder videotape formats. A compact VHS format, VHS-C, was also used for camcorders.

S-VHS
Both Betamax and VHS were far inferior to professional videotape formats, and even to both PAL and NTSC broadcasts. S-VHS was introduced as a higher quality alternative. S-VHS VCRs use special S-VHS videotapes to record at near broadcast quality. Along with S-VHS technology came S-Video, which allows the Luminance (brightness) and Chrominance (red and blue) to be delivered to a TV without combining them first, which results in quality loss. A matching S-VHS-C compact camcorder cassette was also available, as was a similar Hi8 8mm Videotape format from Sony.

Digital Videotape
With the introduction of DVD players and DV (digital) camcorders, analog videotape quickly lost favor with the public, and as a result market share. JVC, the company behind VHS, developed a digital standard based around improved S-VHS technology. D-VHS uses videotapes for data storage rather than analog video. However, the introduction of DVD recorders and DVRs has kept D-VHS from becoming popular.

miniDV and Digital8
Perhaps the last two consumer videotape formats that will be developed are miniDV and Digital8. While miniDV is the standard cassette used for most DV and HDV camcorders, Digital8 was used for Sony's early digital (DV) camcorders. It actually uses Hi8 videotapes, but records the standard DV video and LPCM audio to it as data. The growing popularity of miniDVD, and especially hard drive based camcorders, even miniDV is likely to start disappearing within the next few years.