The Xbox 360 console has been afflicted with many common hardware problems in the past. At first, Xbox 360 users reported that consoles would not boot, and would display 3 red blinking lights on the consoles ring of lights. This problem became known as the Red Ring of Death - or RROD (3ROL) - and it seemed to strike the first version of the console hardware that was released (Xenon) the most. After the console was on the market for a couple of years, a new error was commonly seen by users of the console; E74.

Unlike RROD, the E74 error (as well other E-coded errors that displayed on the TV screen at boot) was accompanied by a single blinking red light in section 4 of the ring of light (bottom right-hand corner). In April of 2009, Microsoft acknowledged that the E74 error was a widespread problem, and included E74-stricken consoles in an extended 3-year warranty originally created to tackle the RROD problem. The E74 error became particularly infamous after the update to the New Xbox Experience (NXE) Dashboard in 2008. 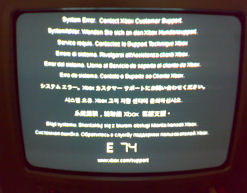 The problem is often attributed to an error with the ANA or HANA scaler chip on the board near the AV cable connector, which might result from a problem originating with the console's famously heated GPU. In some cases the problem can actually be fixed at home by users with no warranty using a variety of methods which could include the same X-Clamp replacement that fixed (although often only temporarily) many RROD-stricken consoles. Users who receive E74 should also note that this is sometimes due to a faulty A/V cable.

The error code most commonly attributed to E74 is 1022. To get an error code from an Xbox 360 console that is displaying an E74 error (or 3ROL) you simply press and hold the "sync up" button (used to connect wireless controllers) and then press the Eject button for the DVD drive. This will bring up the first digit of the error code (usually it is one light blinking red, which represents 1, please note that four lights blinking red represents a 0, not 4). With the sync up button still held, press the Eject button again and you get the second digit. Do this twice more to get the full 4 digits of the error code. For more information on the error code you receive, or on Xbox 360 hardware problems in general, read this Xbox-Scene forum thread.