Titan is the name given to the largest moon of the planet Saturn... but outside of Astronomy and in the world of high performance computing, Titan is a supercomputer in the United States.

The Titan supercomputer is housed at the Oak Ridge National Laboratory, and was developed by Cray Inc. It cost almost $100 million to build, and consumes up to 9 MW of electric power. 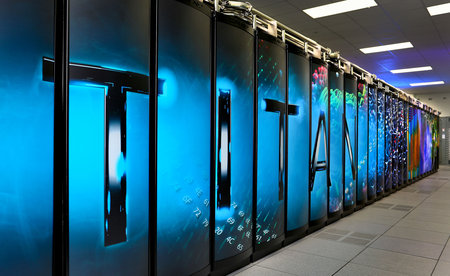 It is powered by the Cray XK7 system, 18,688 nodes, with each holding a 16-core AMD Opteron 6274 processor and an NVIDIA Tesla K20 graphics processing unit (GPU) accelerator. Titan also has more than 700 terabytes of memory.

High performance computing is utilized in highly complex fields of study, such as global climate modelling, simulations of biological systems such as cells and protein folding, as well as studies on the production and consumption of energy resources.

While Titan is likely to be declared the world's most powerful supercomputer at the end of 2012, it will likely be surpassed in performance within a couple of years at most, as the cost of computation and memory continues to decline and Moore's Law keeps on track. By the year 2019, we expect to be in the ExaFlop-era.