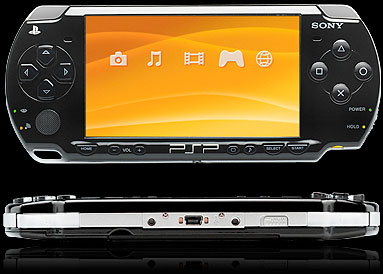 The PSP is also touted for its media capabilities. It can play UMD movies and all games are produced on UMD media. More importantly the console has a memory card slot allowing for gamers to play video and music off Memory Stick PRO Duo memory cards. It plays MP3s, WAVs, WMAs, ATRAC3+ and MP4s.

As of writing, the PSP had sold 41 million units worldwide, making it wildly successful.

In late 2007, Sony release the PlayStation Portable Lite and Slim which is 30 percent lighter and 20 percent slimmer than its bulkier predecessor.

Arguably what has made the PSP so popular has been the ability to run homebrew. The original PSP firmware allowed the running of homebrew without the need for exploits. However, an updated firmware, v1.50 changed that, locking out homebrew code. That didn't stop the hackers however, who through the use of exploits could launch homebrew on PSP 1.50.

Two later versions of the firmware, v1.51 and v1.52 fixed the problem for Sony, and were a nuisance to users who bought their brand new PSPs to discover they had been sold with either of these firmware versions. Some months later, Sony released the next version of the firmware, v2.00.

Once again, hackers got the better of Sony. A flaw discovered in the image viewer allowed some homebrew code to be run. The first homebrew code to run on PSP 2.00 only changed the colour of the PSP screen. However, that was enough to excite 2.00 users as it was simple proof of concept.

See: (Progress being made with PSP v2.0 cracking)

Finally a solution emerged for 2.0 users. A downgrader (by MPH) was released which made it possible to change the PSPs firmware to v1.50. Though the process did show some error messages and came with a warning, it still has not shown any major problems for PSP users who downgraded, and can also be safely upgraded again. Also, homebrew code runs perfectly on a downgraded PSP.

Sony will continue to fight against homebrew being launched on a PSP. It is not surprising that so far, PSPs have not required a hardware solution (like modchips) to bypass security measures. Compare the PSP against the PS2 and XBOX, what are the major differences? The PS2 and XBOX were merely gaming consoles (expect for offering some music features and others) whereas Sony has created the PSP as a portable entertainment device that can do more than play games. With a PSP you can listen to music, view photos, watch videos, browse the internet (with firmware above 2.00) through a wireless network and the latest PSP firmware (2.50) has come even more feature packed.

Also you can store any files on a Memory Stick, provided that you have enough free space. Therefore all these extra features meant that some bugs that could be exploited, most likely exist. When they are found by hackers, another solution is created to run homebrew code on a proprietary platform.

Another example of how a software flaw led to the possibility of running homebrew, is the PS2 Independence Exploit. Some versions of the PS2 console had a buffer overflow bug in the BIOS. Hackers discovered how to modify a file (TITLE.DB) to trigger a buffer overflow and ultimately run code from a Memory Card (unencrypted) when a specific PS1 game was run.

This allowed homebrew to be run on an unmodified console. Sony corrected the problem, but using a Modchips with a PS2 is by far the best way to launch homebrew code on the console.

Manufacturers will probably never stop their customers from finding ways of running unauthorized code on their products; homebrew is most likely here to stay.

Here are a few examples of the PSP in the news recently:
PSP outsells all other consoles in Japan ( 4 May 2008)
PSP firmware gets updated (19 March 2008)


For even more information please visit the PSP entries in our Hardware Section.