4:3 refers to an Aspect ratio (AR) with a height that's 3/4 the width. It's also commonly referred to as 1.33:1 or simply 1.33, in reference to the width being approximately 1.33 times the height. This AR is also commonly referred to as fullscreen, referring to the fact that video with this Aspect Ratio fills the full screen of an analog TV. Widescreen video, on the other hand, must be letterboxed, or vertically compressed to be viewed properly on a 4:3 TV, resulting in only part of the screen being used for the image. 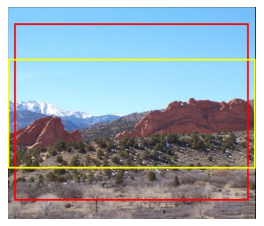 It's also possible for widescreen sources to be edited so they fill the entire area of a 4:3 display. A Pan and Scan transfer can be made, a technique that crops off the sides of each film frame but keeps the correct AR. Alternatively, if the film is shot with an open matte, meaning it contains additional information above and below the widescreen image which can be included in a fullscreen version. This maintains all the information from the original, while still filling an entire 4:3 display. In the image, the yellow box indicates what theater goers would see, and the red shows the 4:3 area that could be encoded for fullscreen. Notice that the width of both is nearly identical. Click on it to see a larger version.

Academy Ratio
In addition to TVs some films, including most shot before the 1950s, have an AR very close to 4:3 of 1.37. Film with this Aspect Ratio is commonly referred to as fullscreen despite having a slightly different AR than fullscreen video for a TV. Fullscreen film can either have the sides cropped or be displayed with a very slight AR error of around 3%.

Getting Started With HDTV