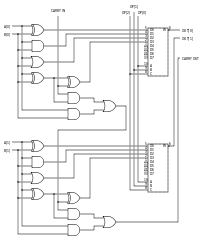 ALUs are integrated circuits in CPU or GPU units set aside to perform logic or arithmetic operations. The most popular operations are addition, subtraction, division, multiplication, LOG, AND, OR and NOT.

Mathematician John von Neumann first developed the idea of an ALU way back in 1945.

ALUs can, but often do not perform division operations because results are usually fractions, which are handled instead by the floating-point unit (FPU).

There is an ALU in all processors but their functions can vary.