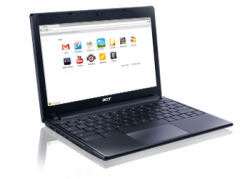 A Chromebook is essentially a netbook that has been built for - and runs - the Google Chrome operating system. Chrome OS is a web-centric operating system that offers only one application - a web browser - as its intended use is for Internet and cloud-based services and storage.

Chromebooks have some unique distinctions compared to netbooks and notebooks in general. One noticeable difference is the inclusion of a dedicated "search key" usually found where the Caps Lock is located on a standard notebook QWERTY keyboard.

As for the hardware in use, the Google Chrome operating system will run on an x86 or ARM microprocessor. Google requests that Chromebook manufacturers use a solid state disk drive instead of a normal hard disk drive in order to keep performance in line with what Google touts, including a 10 second or less boot time.

Chrome requires hardware-based security, utilizing the Trusted Platform Module. Chromebooks use a verified boot feature. The initial boot code is stored in read-only memory and can detect compromises of the system's security.

A Chromebook also should feature a physical switch (under the battery component) that can be used for developer mode.

The first Chromebooks available from Acer and Samsung ran on Intel Atom processors. Acer's first Chromebook featured 2GB of DDR3 SDRAM, a 16GB SSD for storage (low storage because the operating system only uses about 300MB or less, and your files are intended to be stored in the cloud), two USB 2.0 ports, a card reader and built in 802.11n WiFi. It offered up to 6 hours of battery life.

The minimalist interface is displayed on an 11.6-inch LED-backlit LCD display.

Chromebook are only new to the market as of 2011, so there is little data to suggest their popularity.