An Ultrabook is a category of notebook PCs that conform to a certain standard.

After the introduction of tablet PCs to the market, Intel began to push a concept of an ultra-thin, ultra-light, but powerful notebook to compete with tablets; an Ultrabook.

Tablet PCs mostly use microprocessors developed by Intel rival ARM holdings (though manufactured by licensees). With Tablet PCs posing a serious threat to notebook PCs, and therefore to Intel's interests in the market, Intel put up millions of dollars in funds to develop the technologies to make Ultrabooks, and importantly, to make them affordable to consumers.

An Ultrabook aims to be about as thin as a tablet PC and no more than 1.4kg in weight. It must include a solid-state drive (SSD) as opposed to a traditional hard disk drive. It does not contain an optical drive. 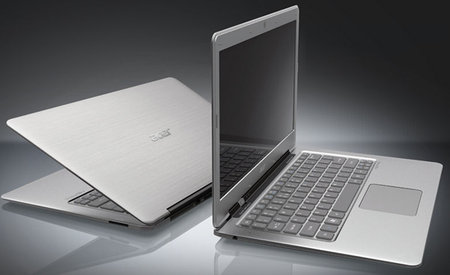 It is driven by Intel's microprocessors and integrated graphics, and in further generations of Ultrabooks, USB 3.0 and PCI Express 3.0 will be required.

Considering the hardware requirements, one of the biggest challenges for Ultrabooks is to become affordable so that they can, eventually, dominate the market for notebook PCs. This will be an ongoing challenge that Intel has put aside significant funds to meet.