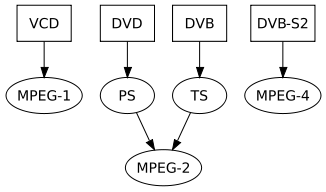 MPEG is short for Moving Pictures Expert Group which is a working group of ISO/IEC in charge of the development of standards for coded representation of digital audio and video.

The first official MPEG meeting was in 1988 and as of 2008 the group has grown exponentially to include over 380 members every meeting.

The official designation of MPEG is ISO/IEC JTC1/SC29 WG11.


MPEG-1- Audio and video compression format developed by MPEG group back in 1993. Official description: Coding of moving pictures and associated audio for digital storage media at up to about 1.5 Mbit/s. MPEG-1 is the video format that has had some extremely popular spin-offs and sideproducts, most notably MP3 and VideoCD.

MPEG-2- A video standard developed by MPEG group. MPEG-2 is not a successor for MPEG-1, but an addition instead -- both of these formats have their own purposes in life; MPEG-1 is meant for medium-bandwidth usage and MPEG-2 is meant for high-bandwidth/broadband usage. Most commonly MPEG-2 is used in digital TVs, DVD-Videos and in SVCDs. Some Blu-ray films have MPEG-2 transfers but not many as there are better lossy compression formats such as VC-1 or MPEG-4 AVC.

MPEG-4- MPEG-4 is one of the latest (audio and video) compression method standardized by MPEG group, designed specially for low-bandwidth (less than 1.5MBit/sec bitrate) video/audio encoding purposes. Probably the best-known MPEG-4 video encoders are called DivX and XviD, which both are nowadays fully standard-compliant MPEG-4 encoders.