An Xbox 360 console may often show an E67 error when booting. This is a Hardware Failure error. The on-screen prompt that displays E67 will instruct a user to contact Microsoft Customer Support, while a blinking red light will be present in section 4 of the ring of light on the front of the Xbox 360 console, as shown in the picture beside this text. Information gathered from users on this error on forums gives clues as to its causes.

An E67 error is generally associated with the console's hard disk drive (HDD), a 2.5-inch SATA HDD encased in an enclosure that clips on to the console. A time-out during reset is known to cause an E67 error. It may also be caused by a defective hard disk drive, or perhaps a problem in the connection between the hard drive and the Xbox 360 board. 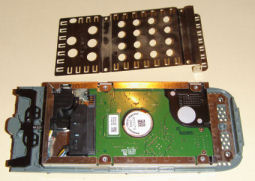 If you get an E67 error, try to unclip the HDD bay from the top (or side if you lay the console flat) of the unit and then boot it. If it should boot up without the hard drive, then you could try getting a different HDD bay from a friend or another console that you have and testing it. If it works, then the problem is with your HDD or the connection within the enclosure. If not, then the problem may be with the connection inside the console, which would turn out to be a worse problem.

The E67 error should give you an error code of 1003. To get an error code from an Xbox 360 console that is displaying an E67 error (or 3ROL) you simply press and hold the "sync up" button (used to connect wireless controllers) and then press the Eject button for the DVD drive. This will bring up the first digit of the error code (usually it is one light blinking red, which represents 1, please note that four lights blinking red represents a 0, not 4). With the sync up button still held, press the Eject button again and you get the second digit. Do this twice more to get the full 4 digits of the error code.