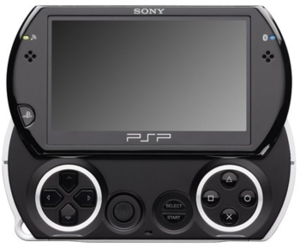 The PSPgo is Sony's latest addition to the PlayStation Portable line, and the first to remove the long heralded proprietary UMD drive.

The PSPgo also adds a new slider design, strips the UMD drive and has everything running off 16GB internal flash memory. The handheld is "50% smaller and 40% lighter than original PSP-1000." The handheld also integrates Bluetooth. Users will also have the ability to download music and movies directly from the PlayStation Network.

A few of the new apps coming with the PSPgo are "Media Go" and "Sense Me." Media Go replaces the current "Media Manager" and integrates easier with the PlayStation Store. Sense Me will "use a 12-tone recognition system to analyze your PSP music library in order to deliver playlists based on moods you select."

The console is set to launch on October 1st in the UK, NA, Australian and Japanese markets, but has faced stiff criticism already (see: related news).

Beginning October 1st as well, Sony will be launching PSP Minis, small games (100MB and under), that looks like direct competition to Apple and iPhone App Store. Sony says their will be 50 titles available by the end of the year.

Additionally, the PSP will get a "Digital Reader" by December, that will allow users to read comic books on their handheld from Marvel.

Sony drops plan for UMD conversion program for PSPGo at launch - Sony Computer Entertainment America (SCEA) has confirmed to Kotaku that PlayStation Portable (PSP) owners will not be able to exchange their games on Universal Media Disc (UMD) media to PSPGo digital copies before the launch of PSPGo next week. The PSPGo does not feature a UMD drive, and relies on Internet purchases to download games that can be installed on the system. (25 September 2009)

Sony E3 summary: Motion control system, PSP Go! and Final Fantasy - First off was the announcement of the worst kept secret PSP Go! updated handheld. Kaz Hirai even made a joke that one of the company's nickname for the device was "The worst kept secret of E3." (2 June 2009)

Guides relating to the PSP (not specifically PSPgo):

For more information on the original PSPs, check their entries in our Hardware Section.