Released in 2010, PlayStation Move is a motion-sensing game controller system that works with the PlayStation 3 (PS3) games console.

While both the Sixaxis and DualShock 3 controllers for the PS3 system had an element of motion control to them, PlayStation Move is designed to provide a more immersive motion experience with PS3 games. Its competitors in the PS3's generation are the Wii console, and the Kinect motion-sensing system for the Xbox 360 console.

The motion controller features a bright Orb on its top that lights up using LEDs. The color illuminating from the wand at any given time is chosen by the console by analyzing the room, in order to make it as distinct to the background color as possible. Inside the motion controller is a three-axis accelerometer and three-axis angular rate sensor, which can be used to detect motion and rotation. To assist, a megnetometer calibrates the controller’s orientation against the Earth’s magnetic field.

The controller has several buttons, such as the primary Move button, the traditional four PlayStation uttons (triangle, square, X, circle) and a PlayStation button. To the right is the Start button, while the Select button is placed on the left, and an analog trigger is on the back of the motion controller. It also features a wrist strap and a USB port for charging. 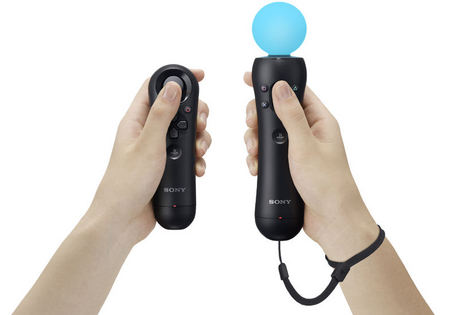 PlayStation Move controllers use Bluetooth to connect to the console. They are powered by a lithium-ion battery that is charged through a USB cable.