An E05 error is sometimes shown by an Xbox 360 console (displayed on TV) with a message prompting the user to contact Microsoft Customer Support. In addition to the on-screen error, the console is also usually blinking a single red light in section 4 in the ring of light on the console (as shown in the picture). While the cause and the real solution to this problem is only officially known by Microsoft, there is information about it available.

This problem is believed to be caused by an overheating CPU (CPU pic shown below). The reasons for a CPU overheating would include a loose or defective heatsink. It may also be due to the stock factory-administered thermal compound on the chip that is supposed to transfer heat to the heatsink. There may not be enough paste applied or the heatsink may not be pressing down on it enough. If you receive this error, and you are still in standard warranty, then you should allow Microsoft to fix this problem for you by contacting customer support. 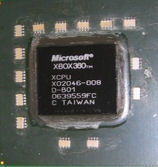 If you do not have warranty, you can try to fix this problem yourself by disassembling the console (How to disassemble Xbox 360), removing the CPU heatsink (the tall heatsink) by removing the X-Clamp on the underside of the motherboard, removing the stock paste by using isopropanol alcohol or Arcticlean and applying new thermal paste to the chip itself. Arctic Silver 5 is highly recommended for this. Only apply a small dab (a little bigger than a grain of rice) to the center of the chip, which will then be spread across the chip when you re-attach the heatsink.

The error code most commonly attributed to E05 is 0011. To get an error code from an Xbox 360 console that is displaying an E05 error (or 3ROL) you simply press and hold the "sync up" button (used to connect wireless controllers) and then press the Eject button for the DVD drive. This will bring up the first digit of the error code (usually it is all four lights blinking red, which represents 0, not 4). With the sync up button still held, press the Eject button again and you get the second digit. Do this twice more to get the full 4 digits of the error code.