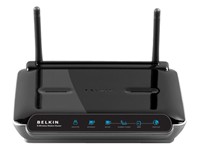 802.11n is a set of specs proposed for networking and wireless communication. The Institute of Electrical and Electronic Engineers (IEEE) 802.11 wireless networking standard would be ammended to dramatically improve the usability, reliability and speed over the previous standards including 802.11b and 802.11g.

While the proposed 802.11n standard is not expected to be finalized until November 2009, there are already products on the market that are marketed as "draft N" which provide significant improvements over other hardware.

The addition of multiple-input multiple-output (MIMO) to improve system performance, channel bonding to the physical layer, frame aggregation to the MAC layer, antenna diversity and spatial multiplexing builds upon he older 802.11a, 802.11b and 802.11g standards.