Serial ATA, or Serial Advanced Technology Attachment (SATA), is an interface for connecting between computer motherboards and mass storage devices. It is now commonly used with hard disk drives and DVD/Blu-ray writing drives. It offers many advantages over the older Paralel ATA (PATA) standard, including data transfer speed advantages and the ability to hotswap devices while a computer is operating if it is supported by the OS.

SATA currently offers data throughput up to 3Gbps for devices currently on the market. Initially, the SATA interface offered a data throughput up to 1.5Gbps on a cable that is cheaper and less bulky than that used for IDE-connected devices. The first generation SATA interface is also known as SATA/150 or SATA 1. Later on the interface was improved upon and the speed was boosted to 3Gbps, while several other limitations with SATA were addressed.

This upgrade can be known as SATA/300 but is often incorrectly described as SATA2 against the wishes of the Serial ATA International Organization (SATA-IO). 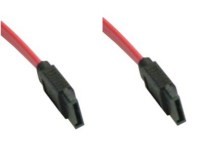 The new specification will maintain the low cost and low power for which the popular storage interface is acclaimed. In addition, backward compatibility with earlier SATA implementations will be maintained by keeping the existing SATA connector configuration, preserving its inherent cost-conscious design while minimizing changes to existing implementations and infrastructures. The same cables and connectors used for current SATA implementations can be used to connect SATA 6Gbps devices, although SATA-IO recommends utilizing quality components to ensure data integrity and robust operation at the fast 6Gbps transfer rate.