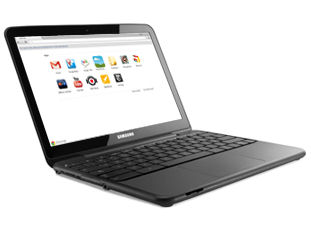 Chrome OS is an operating system developed by Google and deployed in so called "chromebooks available on the market.

The operating system is very much web-centric. It only offers one application - a web browser - which acts as the gateway to online applications and other cloud-based services such as Google Docs. The web browser application includes a media player that can play locally stored media and a file browser.

Chrome OS is deployed only on specific hardware from manufacturing partners of Google. It will run on hardware using either an x86 or ARM microprocessor. Google recommends the use of a solid state drive in order to keep within certain performance promises, such as 10-15 second boot-up time. A chromebook keyboard is supposed to include a new dedicated search key, where you would usually find the Caps Lock on a standard qwerty notebook keyboard.

It has only very limited connectivity with external devices. Since the operating system has no print stack, there is no support for printing except through a service called Google Cloud Print, which would allow printing through certain devices connected to a Desktop PC, for example.

Some early reviews of the operating system have criticized just how minimalist it is. Some reviewers point out that if you were to lose Internet connectivity, it loses almost all functionality, and say a 3G plan that Google launched along with new Chromebooks falls short of a solution to this basic problem.

Others pointed out that you gain more or less nothing extra over a netbook running a Windows or Linux operating system, in which you can simply choose a minimalist configuration anyway.

A selling point for Google's Chrome OS is its security features. The operating system updates itself, and employes sandboxing to protect against permanent changes being made to the system by malicious software. It also uses a "trusted bootpath" feature. The initial boot code is stored in read-only memory and can check for signs of system compromise immediately.

There are some security problems that even Chrome OS cannot project against however, such as the interception of data being sent between the Chrome OS web browser and cloud-based services. Chrome OS extensions in particular might also be vulnerable to attack, though Google says it will continue tightening rules for acceptance of extensions.

The first Chromebook was shipped in June 2011, by Samsung Electronics. It was followed soon after by Acer Inc.