Live Tiles are a feature of the user interfaces' of several Microsoft operating systems and products.

The release of the Windows 8 desktop consumer operating system also saw the Live Tiles and Metro interface ported to the PC. Microsoft highlights Live Tiles as one area where Windows devices are more productive than those of the competition. 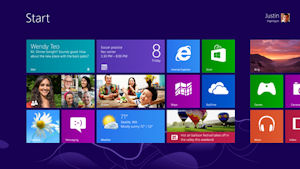 On both Android and iOS devices, the home user interface screens are composed of static icons that are designed for a touch-interface. Generally speaking, these icons are not in any way interactive, outside of perhaps showing a number in case of notifications (on iOS for example) or updates.

Live tiles differ in that they bring real-time information to the home screen of a Windows device. If the Live Tile is for a mail app, then the tile may show information on the senders, subjects or perhaps even the body of e-mails depending on user settings. The tiles may also change to completely different graphics as news feeds and so forth are updated.

When you view a Windows Phone, or Windows 8 Start Screen, you should always see that the operating system is "alive." Microsoft believes this is a major advantage of the static nature of the user interface of iOS and Android.