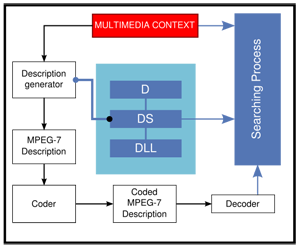 Most of the people always think of video encoding algorithms when they hear the magic word "MPEG". This is quite right for MPEG-7 as well, but not totally.

MPEG-7 doesn't itself offer any new encoding features and it is not meant for representing audio/video content, unlike its siblings MPEG-1, MPEG-2 and MPEG-4. Instead, it offers metadata information for audio and video files, allowing searching and indexing of a/v data based on the information about the content instead of searching the actual content bitstream.

In simplest form, this means that by using MPEG-7, content producers can bundle information such as title, pruduction year and credits into movie or song file. But this can already be done with methods such as ID3 tags -- MPEG-7 just takes the idea much, much further. It allows tagging events in the file separately -- i.e. when movie file contains an explosion where the movie star "dies", MPEG-7 can contain information that would say exactly that. So, by using simple text search, we can find all the sequences where we want to see Sylvester Stallone to "die" in various movies. Or maybe you want to search for a song that contains word "banana" in it? Simple, if the MPEG-7 data contains lyrics (associated to the correct timeframe of course), you can find them easily and you can also jump directly to the position in each song when the word is sung.

MPEG-7 is based on XML and therefore is universal and all the existing tools that support XML parsing should be able to read the data as well, provided that they can ignore binary parts of the file.

The main objectives of MPEG-7 are to provide a fast and efficient way to search or filter content, a way to index large ranges of programs, inform the users on how objects are combined in a scene, and create an independence between descriptions and the actual information.