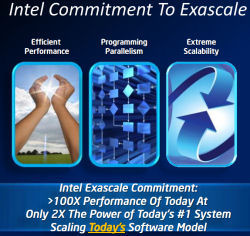 ExaScale capable high performance computing systems do not exist as of July 2011, but are predicted to arrive starting in 2018. ExaScale computers offer 100 times the computation as the fastest computers as of July 2011, and would be used for areas of scientific research such as Genomics, Weather Patterns and Medical Imaging.

At the ExaScale level, an entire functional cell could be modeled and studied. To get to ExaScale, the industry must undergo another cost curve transformation, as well as power consumption requirements.

Intel has stated a goal of reaching ExaScale machines by 2018, and only doubling the power consumption of the fastest supercomputers as of July 2011. The ExaScale machine itself would use a combined 20 MegaWatts of power in full operation.

Overall, ExaScale is a problem for the entire industry and is one that will only be solved as a global effort, to the mutual benefit of mankind.