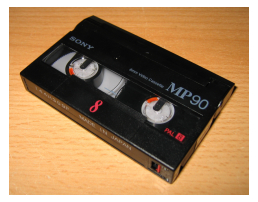 8mm videotapes use a cassette similar in size to their original competitor, VHS-C, but are based on BetaMax technology with the 12mm wide tape used for Betamax scaled down to 8mm. There are actually two types of 8mm videotape. The first was designed for the original Video8 format. With the introduction of higher quality Hi8 camcorders, matching tapes were also unveiled. Although Hi8 is similar to S-VHS, requiring both better electronics and higher quality tape, it shares the basic cassette dimensions with the original Video8 design. Digital8 camcorders also use the Hi8 videotape cassettes, but store digital (DV) video rather than an analog signal.

Video8 was the first camcorder format to use Sony's 8mm videotape. It's comparable to VHS-C, although the cassette is slightly smaller and recording time is greater at 120 minutes (Standard Play mode) vs. 40 minutes for VHS-C. Unlike the consumer VCR market, where VHS won handily, or the professional market that was dominated by high end Beta formats, both Video8 and VHS-C thrived in the consumer camcorder market.

Instead of adopting the new miniDV digital videocassette format Right away, Sony first used Hi8 tapes for their first generation DV-based models. The video and audio encoding used is the standard DV and PCM associated with miniDV, and they also include FireWire to transfer from tape to computer losslessly, just like their miniDV equivalents. Although Digital8 camcorders may be able to playback Hi8 (analog) recordings, they can only record digitally.

Advantages to 8mm Videotape
8mm videotape was very popular for consumer camcorders from the time it was introduced. Along with VHS-C, it enabled manufacturers to reduce camcorder size to the point where they no longer needed to be carried on a shoulder. Instead they became handheld. In contrast to VHS-C, Video8 is capable of recording for a duration equivalent to standard (VHS) videotapes. Due to relatively high recording quality, and Sony's Prosumer market dominance, Hi8 saw a large amount of professional use.

Disadvantages of 8mm Videotape
Unlike VHS-C, 8mm's home VCR equivalent of Betamax (and later home 8mm) was essentially forced out of the marketplace. While VHS-C can be played on a VHS VCR, 8mm formats require either a camcorder or very rare home VCR that uses 8mm cassettes. For Digital8 this is no different than miniDV, although since even Sony eventually switched to the smaller miniDV format, the Hi8 tape market will disappear as camcorders are replaced.