DNS Blocking refers to a method used by law enforcement agencies to deny access to a website.

When a website is blocked in this fashion, it is very likely that the site itself is still online. The problem for the person trying to access the website comes when they type the domain name into a web browser and are taken to a completely different website.

In the case of websites linked to Internet piracy, this is often a notice from the U.S. Immigrations and Customs Enforcement agency. The DNS system, which is used to provide people with easy to remember domain names which are then resolved to numerical IP addresses, may instead lead the user to the incorrect destination, effectively blocking access to the website for most people. If the user has the IP address of the web server itself, this shouldn't be a problem. 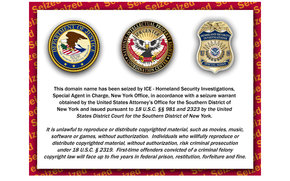 There have been several ways in which this type of block has been circumvented by users. One method is by using a public DNS service that does not re-route any web traffic even if law enforcement insists. One such public service is BlockAID (or PeerDNS as it was originally known.)

Other solutions include plugins for popular web browsers that detect when a previously blocked domain has been typed in, and will instead direct the browser to the web server's IP address, avoiding the DNS blocking.

The use of DNS to effectively censor websites has come under considerable scrutiny. In the United States, efforts to pass the Stop Online Piracy Act (SOPA) in early 2012 were hampered when thousands of websites, large and small, deliberately blacked out (completely in some cases) while the bill was being debated in Congress in order to raise public awareness.

DNS blocking was one of the main parts of the bill (or byproduct of it) that was being opposed because critics argued it would lead to inconsistencies and conflicts between DNS services, and also that the system was never intended to be used for this purpose. DNS is also a major backbone of the world wide web, abstract to most of the world's billions of Internet users who do not understand how vital it is for the system to work correctly.