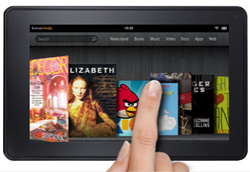 Chad Bartley, analyst at Pacific Crest, has noted today that his research implies Amazon Kindle products are seeing demand deteriorate.
Demand for the Kindle Fire tablet is down "slightly" for the Q2 compared to last quarter, says Bartley, citing a survey of consumers.

Furthermore, Kindle e-reader demand is down as the market heads towards saturation.

Our Q2 Consumer Technology Survey revealed a slight decline in interest and demand for the Kindle Fire. For example, 4.5% of respondents plan to purchase a Kindle Fire, which is slightly down from 4.9% in our Q1 survey.

Our recent supply checks also indicated that demand for Kindle Fire weakened in Q1. Based on our checks, we estimate that component orders fell roughly 10% m/m in February and roughly 15% m/m March and that demand will fall sequentially in Q2. We see the potential for Q1 sales of roughly 2.0 million, compared to our forecast of 2.2 million, and 2012 sales of roughly 13.5 million, compared to our current forecast of 14.9 million. We are leaving our forecasts unchanged for now, in part due to the potential impact on demand from the pending launches of the new 7-inch and 9-inch Kindle Fires, which we expect in Q3.

Based on our supply checks, we cut our 2012 Kindle e-reader unit sales forecasts to 12.3 million from 24.0 million due to weak demand. Our recent consumer technology survey revealed a decline in demand, which supports our cautious view. Although ownership increased to 13% of respondents at the end of Q1 from 11% at the end of Q4, only 5% of respondents intend to purchase a Kindle e-reader in the next 12 months, which is well below the 10% reported in our last survey. The significant decline in demand for Kindle e-readers adds to risk for Amazon.

We attribute weakening demand to the large install base of Kindle e-readers?over 28 million? and maturing of the category after initial adoption by avid readers. We also believe ebooks are being read on a broader array of devices. For example, recent data from Pew Internet Research revealed 41% of e-book readers read their e-books on an e-reader device, such as the Kindle, while 42% read them on a computer, 29% on a cell phone and 23% on a tablet. To a much lesser extent, we believe there is also some cannibalization from the Kindle Fire device.

We continue to expect Amazon to launch a new family of Kindle e-reader devices, which feature multi-touch screens, in Q3.

I see more and more Kindle Fires as I travel to and from work, go to dentist and run errands. Analysts are a dime a dozen; like shrinks, you can always find a few to support any position. It has been out a whole 5 months; how many other gadgets have you seen sell 5 million in 5 months - other than Apple's Ipad? I am blessed - I have both.

I'm glad to see products like the Kindle Fire being popular, so that it'll show other companies that you can still compete in the iPad dominated world, and still make a quality product, and a healthy profit to boot.