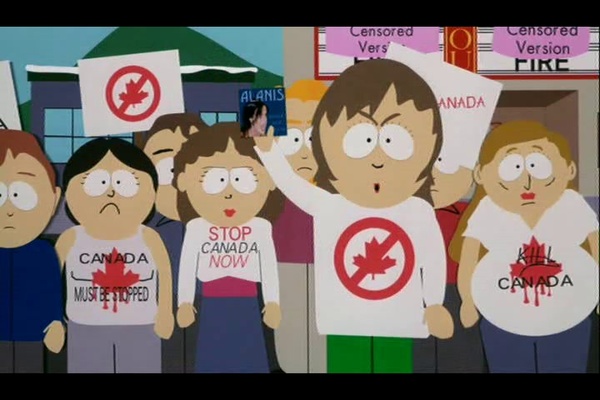 The United States Trade Representative has labeled Canada a haven of piracy, once again.
Algeria, Argentina, Chile, China, India, Indonesia, Israel, Pakistan, Russia, Thailand, Ukraine and Venezuela joined Canada on the "Priority Watch List" of the USTR. Each of the countries on the list are accused of not doing enough to protect U.S. copyrights.

Reads the report (posted after the article): "Canada remains on the Priority Watch List in 2012, subject to review if Canada enacts long-awaited copyright legislation. The Government of Canada has given priority to that legislation. The United States welcomes that prioritization and looks forward to studying the legislation once it is finalized, and will consider, among other things, whether it fully implements the WIPO Internet Treaties, and whether it fully addresses the challenges of piracy over the Internet."

Spain, a mainstay on the list, was removed this year after implementing new laws to fight piracy. The new laws were passed weeks after the U.S. threatened to blacklist them for trade.

The report is generally panned due to its lack of facts and is seen as a tool to pressure nations into passing legislation that is applauded by the media companies in the U.S.

Canada "Live free or Die", no wait, that's New Hampshire where internet is NOT free and you die anyway.

Canada "This Bud's for you", no wait, that's not right.

Let's see how long it takes Harper to kiss ass on this one?

As a Canadian, I take this as a compliment. Why should it be our responsibility to "protect U.S. copyrights".

Eh, one country classifying something like this is just a fart in the wind, the USA is trying to force its will and mindset of stupid laws and treaties that cripple creativity onto other countries.

USTR fuck you. Leave us alone.

I would like to US stop trade with our country lol. Can we say there goes near half your oil supply? We already made a deal to sell a portion of it to China, and no doubt the House wasn't too please about that.

Should US balk on trade with us, Harper has already made it clear that he would look for other nations to trade with.

I no fan of Harper: I didn't even vote for him in the last election and would gladly vote him out of the PM seat next chance I get; however, I have to admit he's put US in a very tough position (and that was just over the keystone pipeline).

Still Harper is taking Internet Piracy more seriously, if we could find a way to get rid of Vic Toews that's a step in the right direction.

The link above claims Bill C-11 has passed the committee and all opposition attempt to stop or slow its progress has failed. No word on when this will be passed as law but expect it in the near future.

Originally posted by snardos: As a Canadian, I take this as a compliment. Why should it be our responsibility to "protect U.S. copyrights".

Agreed!pounder,Regina.,Yanks are just happy it's all U.S. teams in
Stanley,Cup,no Canada competion, even though every u.s. player is born & breed in Canada.
89.5.2012 08:33
kabledog
Inactive

"Each of the countries on the list are accused of not doing enough to protect U.S. copyrights." Are each of these countries doing anything for human rights, the poor, the uneducated or the uninsured besides Canada? Why do we always boo-hoo for the Corporations?

Lets hear it for Sony.
It encourages respect for copyright by selling you DVD movies, blank DVD's and burners to burn those blanks.

Quote:Each of the countries on the list are accused of not doing enough to protect U.S. copyrights.

which country is it that extradites people from around the world for breaking us laws even when they havnt broken there own countries laws.maybe we should all stop trade with america o wait they will just invade countries and take there resources by force.
custom built gaming pc from early 2010,ps2 with 15 games all original,ps3 500gbs with 5 games all original,yamaha amp and 5.1channel surround sound speakers,46inch sony lcd smart tv.
119.5.2012 20:34
aldan
Send private message to this user
Senior Member

ya know,we have been labled a lot of things over the years.comunists.socialists.now pirates.the average american really knows nothing about us and it seems their politicians know even less.this in itself would not be a problem if they didnt have the unmitigated gall to try and label us.i used to think,hey they elect these clowns,maybe they deserve what they get.in retrospect,nobody deserves the disservice that these so called legislators do to their own people.its been 236 years since the first revolution.sounds almost like time for another.

pounder, not every us player was born in canada.

Well I don't want to bad mouth anyone that lives across the border from us since I have been over there and always been treated good.At least they don't drive on the wrong side of the road.Make some darn good whiskey too.