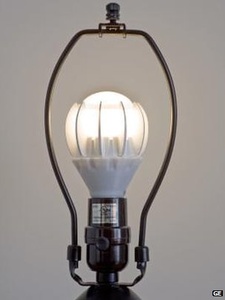 GE, Philips and Sylvania have each showcased LED lightbulbs today that can last for up to two decades.
The bulbs will use much less energy than current generation bulbs, but will cost significantly more due to using LED instead of filaments.

Last month, Philips introduced their LPrize LED, at a cost of $60. The bulb only consumes 9.7 watts while having the equal power of a 60-watt incandescent lamp. Today, the company showed off the EnduraLED, although it has the same power as a 100-watt incandescent bulb while consuming under 15 watts.

It'd be nice to see a comparative model on current bulbs to get an idea of the true value in these bulbs.

I have used a few now and I am a major fan. Though with the high upfront cost it is not easy to convert to them.

Light Emitting Diodes last longer than both fluorescent and incandescent bulbs. This is why I ordered an LCD TV with an LED matrix to backlight the display rather than an LCD with a traditional fluorescent backlight.

Except they don't survive power surges. I had a lightening strike that took down the power in my neighborhood for less than a few seconds, and all my LED bulbs were toast! Everything else in my home survived.

Fluorescent lamps that have the heating electrodes burned out will still ionize by connecting a DC voltage to one of the pins on each end of the lamp. The heaters are to warm up the gas inside so they will ignite easier.I have tried it before with a DC power supply I believe was about 150 volts. They will also ignite the gas with RF enery if you live close enough to a TV or radio station and put an antenna on your roof made of copper tubing.

Can it be proved that it last that long....NO

are they offering 20 year warrenty on them?????if not i'd rather buy a cheap one and take my chances.

can you guarantee you are going to live that long no.they are good i got 1 for 20 dollars at lowes, had 800 lumens.uses 13.5 watts . instant max light.will buy 1 at a time at 20 dollars. some time will have all led .had all florescence in my house . but not bright white they were yellow. the day light bulbs were bright white even when 4 or 5 years old. well maybe half led and half florescence . they both use less power and put out as much light both save money on power bill. the screw in bulb type.