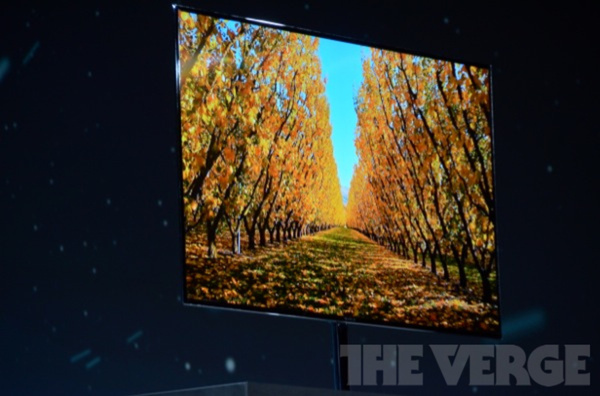 At CES, Samsung followed in LG's footsteps in unveiling a 55-inch OLED TV for the masses.
Differentiating the TV is its "Super OLED" panel which "has self-emitting RGB sub-pixels and is faster than LED," says the company. OLED panels will provide "accurate color reproduction and 'true-to-life picture quality,'" and the OLED display will "virtually eliminate motion blur," as well, noted Samsung, at the time.

Furthermore, the TV included Samsung's newly introduced "Smart Interaction" technology, which includes an integrated webcam and two mics for motion and voice control. For example, you can turn on/off the TV, raise the volume, use some apps, facial recognition and even search via the built-in browser using the interface. The TV will be powered by a dual-core processor.

Today, Samsung has said the TV will be available "during the second half of this year in the domestic market" (meaning South Korea) at an equivalent cost of $9000 USD, making it more than double the price of the next most expensive 55-inch display in the market.

The OLED will also be at least half the weight and depth of even the thinnest LED TV available today.
Tweet
Tags: Samsung TV OLED 55-inch
<Foxconn, Apple to share cost of new factory improvements >Sony eyes return to profit after terrible year
Previous Next

I was going to get one for each room, but, not enough inputs....

"You know, it seems that quotes on the internet are becoming less and less reliable." -Abraham Lincoln.
410.5.2012 23:46
hearme0
Send private message to this user
Senior Member

Originally posted by dali: I'll just wait the couple of years that will take those $9000 to become $1000.

I wonder if we, the consumers, are just being set up for another expensive, short-lived gadget. One we will want to - have to - replace regularly.
The lifespan of the blue cells is still much shorter than the red and green.