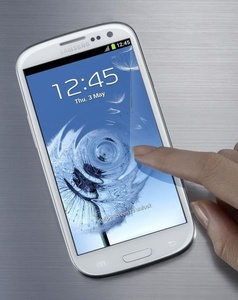 Samsung has finally revealed which American carriers will be receiving the highly-anticipated Galaxy S III smartphone.
The company says Verizon, Sprint, T-Mobile, AT&T and US Cellular will each be getting the phonje unfortunately "exact pricing and retail availability will be announced by each of the five carriers in the coming weeks."

Samsung did note that pricing will "start from $199," but we hardly believe that all carriers will bring that low price to the table, especially not Verizon. The device supports LTE and HSPA+ 42Mbps, so each carrier will be offering a "4G" smartphone.

All American models will have 2GB of RAM and will be named GS III, not a confusing variant like in the past. Outside of the radios, there does not seem to be any differences between the models each carrier is getting.

Samsung has sold over 52 million of the original Galaxy S and its sequel, the GSII, and is said to have seen 9 million pre-orders of the latest model.
Tweet
Tags: Samsung T-Mobile Verizon Sprint Carriers Galaxy S III
<Nintendo names Wii U controller the 'GamePad' >Xbox Music service announced for Windows 8, Phone and console
Previous Next

I know the LTE version will only be a 2 core cpu not a 4 core, only the 3G phones with HSDPA+ will have the 4 cores.

That's on a GS3 launch video with a guy from samsung saying that.
The 16gig phone has 1.5gig of ram for programs I'm not sure what the 32 or 64 will have for programs.

The 64gig isn't released anywhere currently and still waiting for a release date the blue phones get released to stores/carriers in Australia next week.

From the demo ones I've used it's very very good the 4 cores just make for a stupidly fast phone.

This will be the phone to end all smart phones....until my contract runs out hehe

Originally posted by Ryberg360: This will be the phone to end all smart phones....


Until 2 months from now when the next greatest phone ever is released.

I wanna devise a virus and bring dire straights to your environments. Crush your corporations with a mild touch, trash the whole computer systems and revert you to papyrus - Deltron 3030
Comments have been disabled for this article.