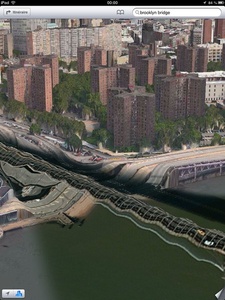 While the new iPhone 5 has been an a major success so far, there has been one widely criticized aspect of the phone and its new OS, iOS 6, the Maps app.
Apple moved away from the gold standard of the Maps and Nav world, Google Maps, to start their own version. However, unlike most Apple features, the Maps app does not "just work."

The app is supposed to have photo-realistic and interactive 3D Maps, and for some places it does. For the most part, however, the maps lack details and have extremely awkward glitches that either "melt" areas of the map or flatten them. Additionally, there is a lack of transit, Street View, point of interest data and awful traffic view data.

Apple has taken the criticism to heart and is actively looking for devs to help work on the failed app. The listings (many of them) are for "software engineers who will handle development, real-time rendering and overall upgrades to the fledgling mapping service, among others."

I would say Google app is the utter gold standard either.

i got an idea, hire some apple fans. It will def. be better

Being nice always has its own consequences
323.9.2012 08:28
KillerBug
Send private message to this user
AfterDawn Addict

I would say Google app is the utter gold standard either.

Google Maps is actually pretty remarkable overall. The only complaints I have are:
1.) No premium, "download in advance" version like what you find on most GPS devices.
2.) No specialized routing, such as tractor-trailer big rig routing (this is a huge market that google essentially ignores).

That said, their car routes are STILL better than the specialized tractor-trailer GPS units that cost $400+...the only downside being that the route must be double-checked against a table of low bridges and restricted routes. Really, it is pretty sad...a $80 GPS adds that table into the calculations and disables U-turns, and it becomes as $400 GPS...yet google can't be bothered to do the same.