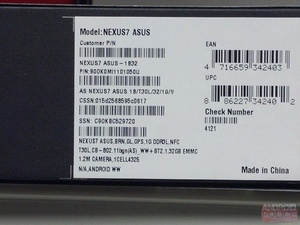 Although Google has still not confirmed it, the 32GB Nexus 7 has been purchased out in the wild, in multiple countries.
First, it was accidentally sold to a lucky buyer in Japan before being made available online in Canada and Europe.

This week, buyers at Staples in the U.S. were able to get their hands on the tablet.

The price was $250, the same price as the 16GB model, meaning a price cut is likely coming for the 8GB model, unless it is being discontinued totally.

Google has a press event on October 29th in which it is expected to unveil the Nexus 4 and confirm the existence of the 32GB Nexus 7.
Tweet
Tags: Google tablet nexus 7 32gb
<Best Buy to sell Flex tablet for about $250 >T-Mobile does away with 200MB data plan for new subscribers
Previous Next

i want one... my nexus 7 screen cracked :(
too poor though

This is definitely worth looking into!

Does anyone know if this will also have an expansion slot for an SD card, or micro SD? If so I would definitely be interested. I'm just not a big fan of cloud storage, especially if you have to be near a WiFi hot spot to have access.

The lack of SD/micro SD slot was the killer for me, so I bought elsewhere.