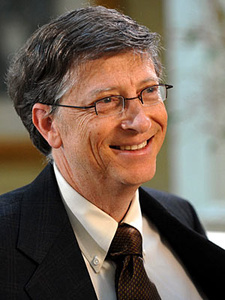 Gates talks Microsoft future in interview.
The Microsoft chairman hinted that Redmond's long term plan for its Windows and Windows Phone operating systems is to merge them into a universal OS, saying they are "evolving literally into being a single platform." He was addressing the increasing amount of sharing between Windows 8 and Windows Phone 8.

He also took time to praise the Microsoft Surface tablet, and promised an "October surprise" in the area of Windows 8 apps, which is a weak area compared to the alternative app collections for Android or iOS.

Watch the short in-house interview with Bill Gates below.

bill is the man

i think this is the right approach. problem is when you use the same OS both on mobile platform and in PCs, lot of factors come into play like performance, heat, battery life, and so on. these are the reasons as to why even windows 7 could not have success in mobile platform although in laptop/desktop, it rocks. iOS feels nice but feature/performance-wise, it is nowhere close to OSX.

So Windows Phone 8 has one store that all developers have to use if they want to sell the applications. No other company or person can make there own store. So when they combine Windows Phone 8 and windows 8 into one OS what do you think is going to happen?

Microsoft has a long term plan to close down the #1 OS in the world so they can take a cut of all software sold and be the gate keepers to what is allowed to be sold and what is not.

If there is not a law against this tactic of building a monopoly into your business there should be one.

So you are going to lock up the desktop to a crappy DRM scheme?

Copyright infringement is nothing more than civil disobedience to a bad set of laws. Lets renegotiate them.
523.10.2012 08:12
xtago
Send private message to this user
Senior Member

Bill has only been brought in to try and sell win8 to people companies but fully knows it'll fail.

Gets asked a question and can't answer it properly or straight up and stuttering and stuff trying to come up with something to say.

It's such a poor sell and it's not funny.

I fully expect ballmer to be stepped down due to this fail.

The desktop and phone can't be combined it's 2 completely different products, Apple doesn't combine them actually but they make them look/seem the same.

MS is trying to do the above but only to force PC users onto their phone or OS product because someone thought it'd be great just having the exact same thing but it'll fail on the desktop because it doesn't work with a mouse and keyboard and it won't work on the phone because it'll be too clunky and made far to complex for a phone to handle.