Written by Andre Yoskowitz @ 08 Nov 2012 1:26
Four years ago, thanks to a rift over Internet censorship, Google decided to leave the Chinese search market.
However, there still appears to be some users over there, with Google keeping 4.72 percent share, good for fourth place in October. In September, the company controlled 5.1 percent share, as it continues to trend down.

Baidu has 73 percent share and newcomer Qihoo 360 jumped to over 9 percent after launching in August. Qihoo CEO Zhou Yongyi has said he wants to "destroy Baidu's monopoly" and is aiming for 15 to 20 percent share.

Furthermore, Google Maps usage in the nation fell substantially, as well, down to just 9 percent share, good for 6th place. Apple's iOS 6 Maps was to blame for the drop, as it uses Autonavi data. Autonavi is the most popular mapping software in the nation, with 25.9 percent share. 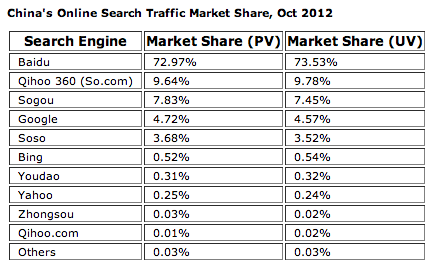