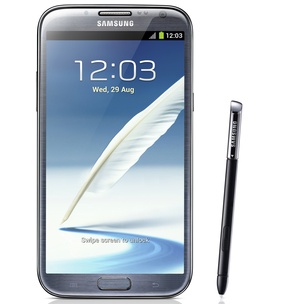 Of course, the figure pales in comparison to sales of the Galaxy S III, which have topped 30 million, but the Note II features a massive 5.5-inch screen that critics were afraid would scare away consumers.

Despite launch earlier this year, the phablet only recently made it to most of the major American carriers late last month, leading to the spike in sales.
Tweet
Tags: Samsung Sales 5 million galaxy note ii
<Intel Atom chips to remain 32-bit-only until 2015 >Google clearly does not know how to prepare for selling a phone
Previous Next

Hmm, still debating on whether or not to get a Galaxy S III or this sucker. Don't have large hands, but I don't mind holding the phone with 2 hands. Hell, I still do with my Razr Maxx when watching YouTube or Netflix!

Chance prepares the favored mind. Look up once in a while and you might learn something. - BLUEBOY
227.11.2012 21:34
Ripper
Send private message to this user
AfterDawn Addict

I don't have a problem with large screens when they are inherently meant to be used with two hands, ie tablet, but does anyone actually consider what they look like with 5.5" of phone against their ear? You've got to be kidding.

Furthermore, who is wearing jeans or whatever with pockets that big?