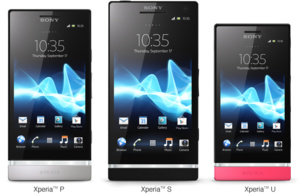 According to IDC, Sony has seen a strong comeback in the smartphone market.
In global sales, Sony moved into third place for the Q3 2012, jumping from sixth in the same quarter in 2011.

Despite the jump, the company's market share actually fell, from 5 percent to 4.8 percent as Samsung and Apple continued to crush the competition.

Sony has seen some success with its Xperia line of smartphones, mainly outside of the U.S., however, where it has received very little attention.
Tweet
Tags: Samsung Smartphone IDC xperia
<Nintendo announces Wii Mini for Canadian gamers >Gmail users can now send attachments up to 10GB
Previous Next

i find sony phones to be nice indeed. the only problem is when it comes to smartphone, people don't "think" about sony at all after the departure of standard music phones (sony ericsson).

Mukhis..yes thats a good point, go in t any phone shop and it ain't sony that they try a promote

They set themselves up for failure in the US by offering phones only on AT&T. They're excluding nearly 200 million potential buyers by leaving out the other 3 carriers.

Samsung sells multiple devices on all 4 carriers and some of the regional carriers and Apple sells iPhones on 3 of the 4 plus a couple regional players too. This is the reason they are far more successful. The Xperias aren't bad devices.

HTC, Samsung and Apple are seemingly the leaders to me as I have NEVER EVER seen an Sony phone ever. Don't know anyone with one and I work full time as an IT pro and part time as a waiter so I'm not cooped up in an office or my house all the time. I see phones everywhere.

And moreover......according to Zeus....ATT is the only Sony phone carrier limiting them even more. Does anyone here know anyone with one of these????

Quote:mainly outside of the U.S., however, where it has received very little attention.

I believe the opposite meaning is intended. In English, the current sentence would mean the phone is being ignored globally, while quite popular in the US.
Comments have been disabled for this article.