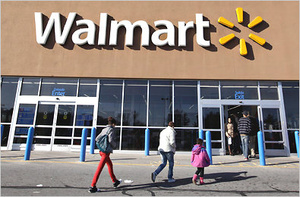 Wal-Mart has significantly slashed the prices on new iOS devices.
The world's biggest retailer will sell the base model iPhone 5 for $127 with contract, while also cutting the price of the iPhone 4S to $47.

Additionally, the retailer is dropping the price of the 16 GB third-generation iPad with Wi-Fi to $399. Starting on Monday, the iPad deal will come with a $30 iTunes card for free, as well.

There had been a rumor that Wal-Mart would also discount the fourth generation iPad, as well, but a spokesperson has declined.

When the prices become effective, they will be the largest sales prices on iOS devices we have seen yet.
Tweet
Tags: Wal-Mart Sale iPhone 5
<Woman tasered for trying to buy too many iPhones >Surface RT now available in UK
Previous Next

i heard they come with a prius and dental dam

What? If there's any corporation with the resources to give a legitimate discount like this, it's WalMart. I have faith that they will have a significantly smaller profit margin off each device sold, even in the long run. I can see the motivation, though, being to use their massive assets to leverage themselves far above their competition like Best Buy and Radioshack...but what's new there.

people bitch about high prices,but when offered a discount,its some kind of conspiracy.cant win i guess.

Interesting thing is that why didn't they jump on this when the recession was in, and slash those iPhone prices then? Why now all of a sudden?

Chance prepares the favored mind. Look up once in a while and you might learn something. - BLUEBOY
716.12.2012 21:20
DVDBack23
Send private message to this user
Staff Member

This is actually a very big deal since Apple does NOT slash prices for devices they sell to retailers. Margins are razor thin for the carriers (from what I hear) on actual hardware sales.

AfterDawn News
AfterDawn Guides
One of the largest collections of software on the Web: AfterDawn Software Section
816.12.2012 21:33
dirtyphoe
Send private message to this user
Newbie

Originally posted by ivymike: Don't buy too many or they'll taser you.....

They'll make it back up in the eggs, milk, and bread people will purchase with this phone.

No interested on "The iOS Trojan Horse" devices, not even for free.
Now: if they are free.... then I will trow them down into the garbage can.