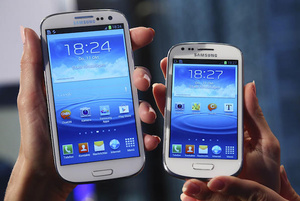 Apple has agreed to drop Samsung's recent Galaxy S III Mini from its ongoing patent-infringement lawsuit against the company.
The tech giant will withdraw the smartphone from the case as Samsung has made it clear that they will not sell the device in the United States, instead choosing to sell it in Europe and Asia and parts of Africa.

Apple won a case in the nation back in August against Samsung, being awarded $1.04 billion for years of infringement on a number of devices including phones and tablets.

A second case is scheduled for trial in 2014 over separate patents.

The filing reads: "We have withdrawn [the Mini] given Samsung's representation that it is not making, using, selling, offering to sell or importing that product into the U.S."
Tweet
Tags: Samsung Apple Patents Lawsuits galaxy s iii mini
<Pinterest sued >Report: 'Project X' was most pirated movie in 2012
Previous Next

By imitating the remarkable S3 in design terms, Samsung may have shot itself in the foot. The handset looks like it should be a smaller version of a great phone, but in fact it is cut down not just in size and that’s bound to dissatisfy many people. If you take that and then put the phone against something like the less expensive and better featured Google Nexus 4 then there’s really no contest.

Aww come on the likes of htc have done this for ages with popular flagship phones, if you want a proper s3 buy one.