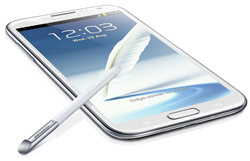 Samsung has announced today that they have reached a significant sales milestone in their home nation.
The company has sold 1 million Galaxy Note II devices in Korea in three months, with sales ever accelerating.

Globally, the company has sold 5 million Note II and says sales momentum may lead them to 10 million sales by the end of January.

The Galaxy Note II is arguably the best phone to own right now, as its specs and feature set are mostly unrivaled. The phone is also popular for its large 5.5-inch screen, a huge boost over the iPhone and even over its own more popular brother, the Galaxy S III.
Tweet
Tags: Korea Sales samsung galaxy note ii
<Netflix has 120 encodes of each film offering >Microsoft apologizes for Cloud Saved Games outage, offers consolation
Previous Next

Quote:The Galaxy Note II is arguably the best phone to own right now, as its specs and feature set are mostly unrivaled

Albeit the SG Note 2 is amazing, it isn't my cup of tea. I would not consider it "unrivaled". Since it is a phablet, it beats other 5+ inch phones but there aren't that many. Bigger isn't always better. I saw my coworker calling on one of them...it makes you look really dumb. And after awhile, you easily tend to switch hands and sometimes when no one is looking, you use two hands to hold up the phablet. I'm glad it is out there for those who prefer it. My liking is a bit more "standardized" like the Nexus 4.

The specs for Samsung Galaxy Note 2:

And here are the specifications for the Nexus 4.

The Nexus 4 in my opinion would give a better display quality. Neither phone has an amazing top of the line camera. Yeah the Note 2 has more battery power but that is because it needs it! The microSD card isn't an issue for me because 8gb is more than enough for me. Plus I'll have my dropbox account and Google Drive on the phone. And the Nexus 4 is cheaper and comes unlocked. In my opinion, the Nexus 4 is the top Android phone right now for the general consumer.
Comments have been disabled for this article.