Redbox Instant going out of beta in March 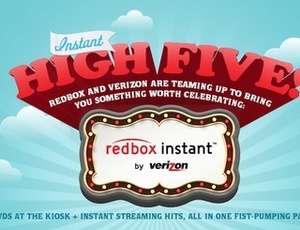 Verizon's streaming movie service, Redbox Instant, will go out of beta in March.
The service, which directly competes with Netflix and Amazon, has one distinct advantage. Redbox has 42,600 kiosks around the nation, and subscribers to the streaming service get codes for 4 free rentals every month including brand new releases.

At $8, the service is the same price as Netflix, which charges an additional $8 if you want access to DVDs by mail.

Says Redbox Instant by Verizon CEO Shawn Strickland: "We're doing the invitation-based beta now...but we will launch sometime later this quarter. Movies are the core of the Redbox brand, and movies are underserved in this space."

I see that Redbox Instant is trying to offer a budget friendly service for people who want both streaming and physical media but don’t want to pay $16 for Netflix service, but it is so limited, I wonder how attractive it will be to folks. The way I consume media, I need more selection and an unlimited service for both, and I imagine most folks would be the same if they had the option. I know my DISH coworker and I watch a lot on our iPad when we’re on lunch or break. I get that convenience along with over 100,000 choices by mail, streaming in my home or on the go with my DISH Blockbuster @Home. That kind of convenience and choice helps me enjoy the media that makes me happy, more often.

Verizon? No thanks. I prefer Verizon went out of business...

And unfortunately, I don't use Redbox very often since their only kiosks are 8 miles away. I'd have to go out of my way to return them :( And my vehicle is a gas hog...

If you beat Netflix for price and availability though, I'll consider it. But I've been with netflix since 2003 :p