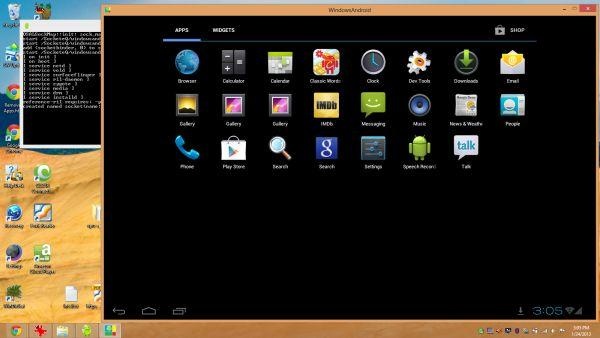 "WindowsAndroid" has ported Android 4.0 to Windows PCs and tablets, giving fans a chance to use the mobile operating system on their devices.
The full "Android experience" is available, including the browser, gallery, all Google software and even third-party apps. There is also graphics acceleration, a Dalvik VM and the standard Android user interface well known to Android users.

WindowsAndroid works with touch, as well as keyboard and mouse so it should not matter where you install it.

On the third-party app side, even though the Google Play Store is available, most apps show up as incompatible. You can side load the files, but most cause WindowsAndroid to crash, at least at this early stage in its development.

Make it an OS to replace windose.

Copyright infringement is nothing more than civil disobedience to a bad set of laws. Lets renegotiate them.
228.1.2013 00:45
OldSchoolCPU
Send private message to this user
Newbie

I have went to this site and went thru the registration process twice, and have not been able to download. No email with link to download the software. Checked spam folder and spam settings and still no email/link. Not sure what the issue is.

yawn... another android emulator. Hasnt this been done to death already by small groups? I mean there is "Jar of Beans", Android SDK, manymo, and bluestacks. They should all just get together and release one fully optimized program...
And for those asking about a full OS replacement (ie ZippyDSM), look up "android x86". It doesnt support all PCs yet, but it is android running on an X86 processor. I had it running on my Asus EEE, but with the lack of touchscreen I decided that a keyboard/mouse-oriented OS was more fitting for my purposes.

Downloaded the file, installed it in a VirtualBox virtual Win 7 Ultimate 64 bit O/S, and does not run/load at all.

Why would you want to anyway?
Android is great on touch screen phones & tablets....but for a desktop PC (and I can't see touch screen being a big deal here either)?
Can't say it excites me.