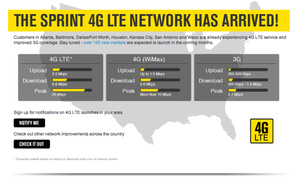 Sprint has expanded its 4G LTE network, a promising sign for the carrier which has lagged behind rivals AT&T and Sprint.
Reads the carrier's press release:

Add Boston, Austin, Fort Wayne, Ind., and western Puerto Rico to the expanding list of areas receiving Sprint 4G LTE service. We are starting 2013 by building on the progress we made last year to introduce an all-new 4G LTE network.

Well according to this article Sprint is rivaling itself

Oh, Im sorry... Did the middle of my sentence interrupt the beginning of yours?
331.1.2013 23:01
jookycola
Send private message to this user
Member

There is something really wrong when metro Detroit, Michigan (a major American city) doesn't get 4G but a po'dunk small town like Fort Wayne, IN. and Puerto Rico do.