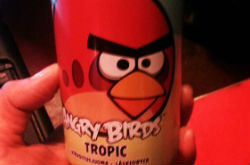 In November, we reported that Finnish company Rovio, the makers of the Angry Birds franchise, released their own soda in the nation.
The soda was so popular, at least at launch, that it actually outsold behemoths Coke and Pepsi during its first month.

Apparently, the soda is successful enough that Rovio is now expanding the soda to four new nations.

Russia, Spain, Australia and New Zealand will be getting the drink in all flavors very soon. The current flavors are "Tropic (tropical fruit-flavor), Paradise (mandarin and pineapple), Lagoon (apple and pear), and Comet (orange and cola)."

When asked about the UK and US, Rovio CMO Peter Vesterbacka added: "Right now, we are looking at the U.K., so that should happen over the next few months. We want to find the right partners on the distribution side in various markets, so we will look to launch market by market. Sales in Russia are off to a really, really good start, which highlights how well the Angry Birds brand works with different products."
Tweet
Tags: Angry Birds Rovio soda
<Minecraft creator made over $100 million in 2012 >Kim Dotcom offers money for Mega hacks
Previous Next

They all sound worth at least trying except orange and cola... just my opinion.

Yeah I just don't see it selling in the already saturated soft drink market here in the US.

i looked in my local shops 10 minutes ago and they have angry birds grape,strawberry and apple flavour.i tryed the apple flavour and just taste like watered down apple juice.finished the 240 ml bottle in 2 mouth fulls.waste of $1.90