Lumia owners happier with Nokia than Symbian owners were 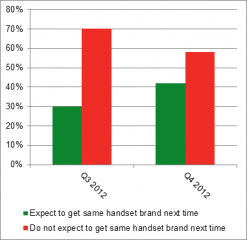 According to a new YouGov survey of 4,169 British adults, it appears Lumia owners are happier with Nokia than Symbian owners ever were.
The survey, completed in December, concluded that Lumia owners are much more likely to recommend their phones to others.

In December 2011, 99 percent of Nokia smartphone owners had Symbian phones, compared to 40 percent being Lumia owners as of December 2012.

42 percent of owners said they would buy a Nokia next time, with 45 percent saying they would recommend the company, the highest numbers in years.
Tweet
Tags: Nokia Symbian Customer Satisfaction Lumia yougov
<The $1000 Nvidia GeForce GTX Titan is here >Tizen 2.0 is here
Previous Next Write a comment
Comments have been disabled for this article.