Recent headlines | Google, Spotify and many other major websites are all down across the globe 3
AfterDawn > News > AP Twitter account hacked, causes stock market crash 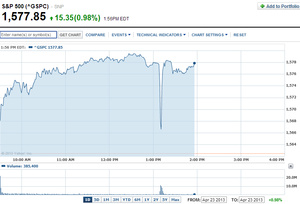 Hackers caused a mini stock market "flash crash" this afternoon after sending a bogus tweet from a hacked Associated Press (AP) Twitter account.
The tweet, posted below, read that there were explosions at the White House and President Barack Obama had been injured. The account was quickly shut down, but the damage had been done.

U.S. markets, including the Dow Jones and S&P 500 fell 1 percent in one minute before rebounding.

White House spokesperson Jay Carney quickly dismissed the story by saying the President was doing just fine. The AP has had all of its Twitter accounts suspended. Just goes to show the markets are senseless.

Originally posted by KillerBug: Just goes to show the markets are senseless.


Agreed. This world is dumb. Someone please find another one and send me there.
"You know, it seems that quotes on the internet are becoming less and less reliable." -Abraham Lincoln.
426.4.2013 22:30
omendata
Send private message to this user
Member

Stock market has been manipulated by themselves for years - the internet stocks crash of years ago was engineered as is all the ups and downs by the hedge funds its all a conjust like the banks , accountant and politicians.

Yes, it is. The whole stock market should just not exist at all. Companies and countries should have wealth based on what has real value, not for what may have it or not in an uncertain future.


"You know, it seems that quotes on the internet are becoming less and less reliable." -Abraham Lincoln.
627.4.2013 12:55
dali
Send private message to this user
Member


"You know, it seems that quotes on the internet are becoming less and less reliable." -Abraham Lincoln.
Comments have been disabled for this article.