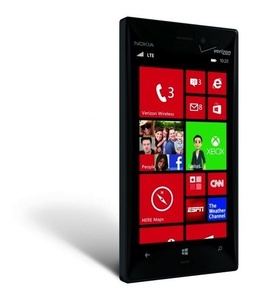 Verizon has announced this week that it will sell the new high-end Nokia Lumia 928.
The Lumia 928 will sell for $99 after rebate and with contract.

Nokia's latest is very similar to the Lumia 920 sold through rival AT&T, except it is lighter and has a slightly different screen.

Under the hood is a 1.5GHz dual-core Snapdragon S4 processor, a 2,000mAH battery and 32GB internal storage. The camera is impressive with a Carl Zeiss f/2.0 lens, 8.7-megapixel sensor and Xenon flash.

Verizon is also offering $25 in Windows Phone Store credit with purchase that can be used on apps and games.

Originally posted by megadunderhead: and again a windows phone that will be worthless in a year when microsoft launches windows mobile phone software version 9 no thank you

stop living in the past... they changed that... also it will not be useless even if they did stop supporting it.. I have a htc arrive that works just fine to this day.... it doesn't crash and doesn't have glitches that my android phone has..
313.5.2013 13:30
dEwMe
Send private message to this user
Senior Member

Man I hope they abandon Windows 8. It is killing the PC. I wouldn't buy it on a tablet or phone either. I have used it and hate it. You'd think they could look at the poor sales of new PCs and etc and get a clue...