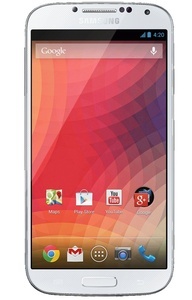 Google has given Samsung's Galaxy S4 the Nexus treatment, showing it off at the Google I/O 2013 conference.
The Samsung Galaxy S4 variant runs Android 4.2 Jelly Bean and will be available contract-free for $649 supporting T-Mobile and AT&T's LTE networks. It will join the rest of Google's Nexus line-up on Google Play from June 26.

"It brings together cutting edge hardware from Samsung with Google's latest software and services -- including the user experience that ships with our popular Nexus devices."

Will the Google Play version cost less? The Samsung "smart" features are helpful sometimes but if it means slashing the original price in half for stock Android OS, I would buy this in a heartbeat.

wow, so this runs stock android meaning it's just like nexus. hmmm...

Live Free or Die.
The rule above all the rules is: Survive !
Capitalism: Funnel most of the $$$ to the already rich.
517.5.2013 03:33
PraisesToAllah
Send private message to this user
Member

The unlocked mobile is expensive compared to the same mobile that comes with 2 year contract!