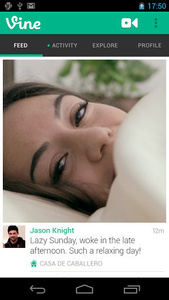 Vine for Android has been updated to include the ability to use front-facing cameras, and it also has an added Upload Manager for unsubmitted posts.
Vine is a popular mobile app that lets users record and post video footage no longer than 6 seconds and share/embed them into updates posted to social networking services such as Twitter, who bought Vine in October 2012. It was available for iOS when purchased by Twitter, which then released the first version of Vine for Android earlier this month.

Now the Vine for Android app has been updated for performance and to add some new features:
Update available from Google Play Store.
Tweet
Tags: Vine for Android
<Xbox 360 to pass Wii in US by year's end >Toshiba announces new 58-, 65- and 84-inch 4K TVs
Previous Next Write a comment
Comments have been disabled for this article.