Recent headlines | Now it pretty sure: Windows 11 will replace Windows 10, Win10 support will end in 2025
AfterDawn > News > Acer to move away from Windows and move more towards Android, ChromeOS

Acer to move away from Windows and move more towards Android, ChromeOS 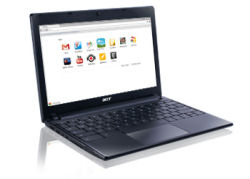 Acer has noted this week that it will reduce its exposure to Windows PCs and laptops and instead invest more in "non-Windows business" such as ChromeOS and Android devices.
The company hopes to grow such devices to 12 percent of total revenue by the end of the year.

President Jim Wong notably says he sees a growing market for Chrombooks, based on the ChromeOS operating system. The light devices made up 3 percent of the company's shipments last quarter.

Overall, Acer reported a poor quarter, with PC shipments down 35.5 percent for the quarter and a reported operating loss of $20.5 million.

"For the PC industry, I haven't seen light at the end of the tunnel," Wong said. "First, we have to sustain our market share and protect our bottom line ... and by doing tablets and smartphones right, we can be prepared for the day after tomorrow."

Wong also noted that they expect Android devices to account for up to 40 percent of total revenue by the end of 2014.
Tweet
Tags: Android Acer
<Asus pulls out of Windows RT market due to industry 'sentiment' >Rumor: Motorola building the Nexus 5
Previous Next