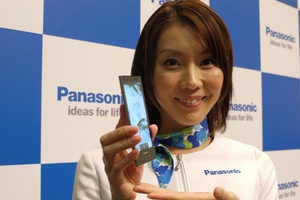 Panasonic has announced it will be exiting the smartphone market in Japan, instead outsourcing production to emerging markets like India.
The struggling company, which has lost $15 billion in two years, has staked the entire company on turnaround efforts. The company is trying to move from consumer gadget maker to supplier.

As part of the plan, President Kazuhiro Tsuga says he would cut out any division that cannot meet a 5 percent operating margin minimum within three years.

Tsuga says the mobile division was likely to lose $11.02 million this year, following an $80 million loss last fiscal year. In 2001, the company had 19 percent of Japan's mobile market share. That share is now down to 7 percent. "It's not acceptable for the company to be bleeding red ink like this, so we have to think about ways to develop assets that we do have in a more effective direction," Tsuga added.

Despite exiting the consumer smartphone market, Tsuga says the company will develop enterprise smartphones similar to the "Toughbook" laptop PCs.
Tweet
Tags: Panasonic Smartphones
<Qualcomm introduces 'Toq' smartwatch >PlayStation 4 to support less controllers than Xbox One
Previous Next
Comments have been disabled for this article.